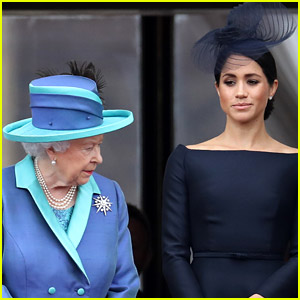 A report emerged last week suggesting that Meghan Markle would be unable to attend Prince Philip‘s funeral this coming weekend after his tragic death at age 99.

Now, a source is speaking out about how Queen Elizabeth feels about her granddaughter-in-law being unable to travel due to her pregnancy. If you don’t know, Meghan and Prince Harry are expecting a daughter in late spring.

First, a source revealed that Meghan had contacted the Queen.

“Meghan expressed condolences,” a source told People. The source added about how the Queen feels that Meghan can’t travel: “The Queen understands why she can’t travel at the moment.”

Find out who else will not be in attendance at the funeral.