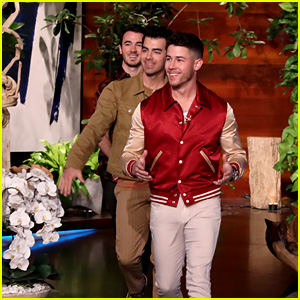 The Jonas Brothers are talking TikTok – and big surprises!

The Happiness Begins hit-makers made an appearance on The Ellen DeGeneres Show on Wednesday (January 22).

PHOTOS: Check out the latest pics of The Jonas Brothers

During their appearance, they spoke about the success of their sold-out Happiness Begins Tour, and how excited they are to have some of their sports heroes in attendance at the show.

Nick told Ellen about his new puppy, Gino, and the brothers explained their TikTok reenactment of the infamous Keeping Up with the Kardashians fight.

They also teased a “very special” surprise during their Grammy performance of “What a Man Gotta Do,” and played a game of “Say Whaaat?” with Ellen.

Watch their appearance inside…