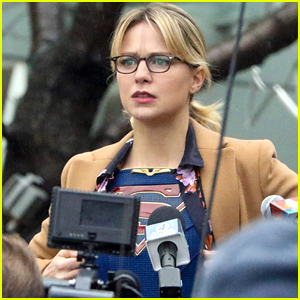 Melissa Benoist speaks in front of a group of reporters while filming scenes for Supergirl in Vancouver, Canada on Monday (December 2).

The 31-year-old actress made a huge announcement to the press during the scene, revealing herself to be Supergirl!

PHOTOS: Check out the latest pics of Melissa Benoist

Kara Danvers isn’t hiding anymore, and just like her cousin Clark Kent, wears her super suit underneath her clothes.

Don’t forget, the Crisis on Infinite Earths crossover event between Arrow, The Flash, DC’s Legends of Tomorrow, Supergirl and Batwoman, will kick off THIS Sunday, December 8th.