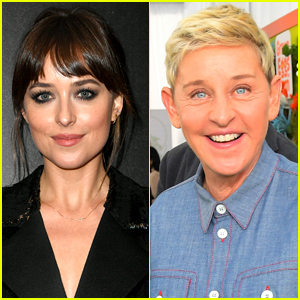 The plot has thickened in the awkwardness of Dakota Johnson‘s interview with Ellen DeGeneres!

If you missed it, Dakota‘s interview with Ellen went viral after there was an awkward exchange about whether or not Ellen was invited to Dakota‘s birthday party in October.

During Dakota‘s appearance, Ellen asked about Dakota‘s 30th birthday party, and awkwardly grilled the actress about not being invited – to which Dakota insisted she was.

“Actually that’s not true, Ellen…Ask anybody, ask your producer,” she said.

“Oh right, I had that thing,” Ellen joked.

Well, the Internet discovered that the weekend of Dakota‘s birthday party fell on the exact same weekend when Ellen was photographed sitting next to former President George W. Bush at the Cowboys football game. Ellen‘s friendship with the former President was brought to the spotlight at the time and she received a ton of backlash.

Also pictured inside: Dakota signing autographs while leaving Tig Notaro: But Enough About You with Dakota Johnson on Sunday night (December 1) in Los Angeles.