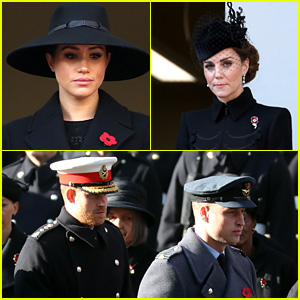 Prince Harry and Meghan, Duchess of Sussex (AKA Meghan Markle) and Prince William and Catherine, Duchess of Cambridge (AKA Kate Middleton) are paying tribute.

After reuniting for their first joint public outing on Saturday (November 9) since July, the royal couples joined Queen Elizabeth and members of the royal family to honor those lost in war on Remembrance Sunday (November 10) at a Remembrance Day ceremony at the Cenotaph war memorial in London, United Kingdom.

PHOTOS: Check out the latest pics of Meghan Markle

Queen Elizabeth, Duchess Kate and Camilla, Duchess of Cornwall watched together on one balcony, and Meghan watched from another with Sophie, Countess of Wessex and Sir Timothy Laurence.

All of the royals were seen wearing their red poppy pins, which symbolize remembrance of World War I and veterans.

Princes William and Harry joined father Prince Charles in the ceremony of laying wreaths of poppies.